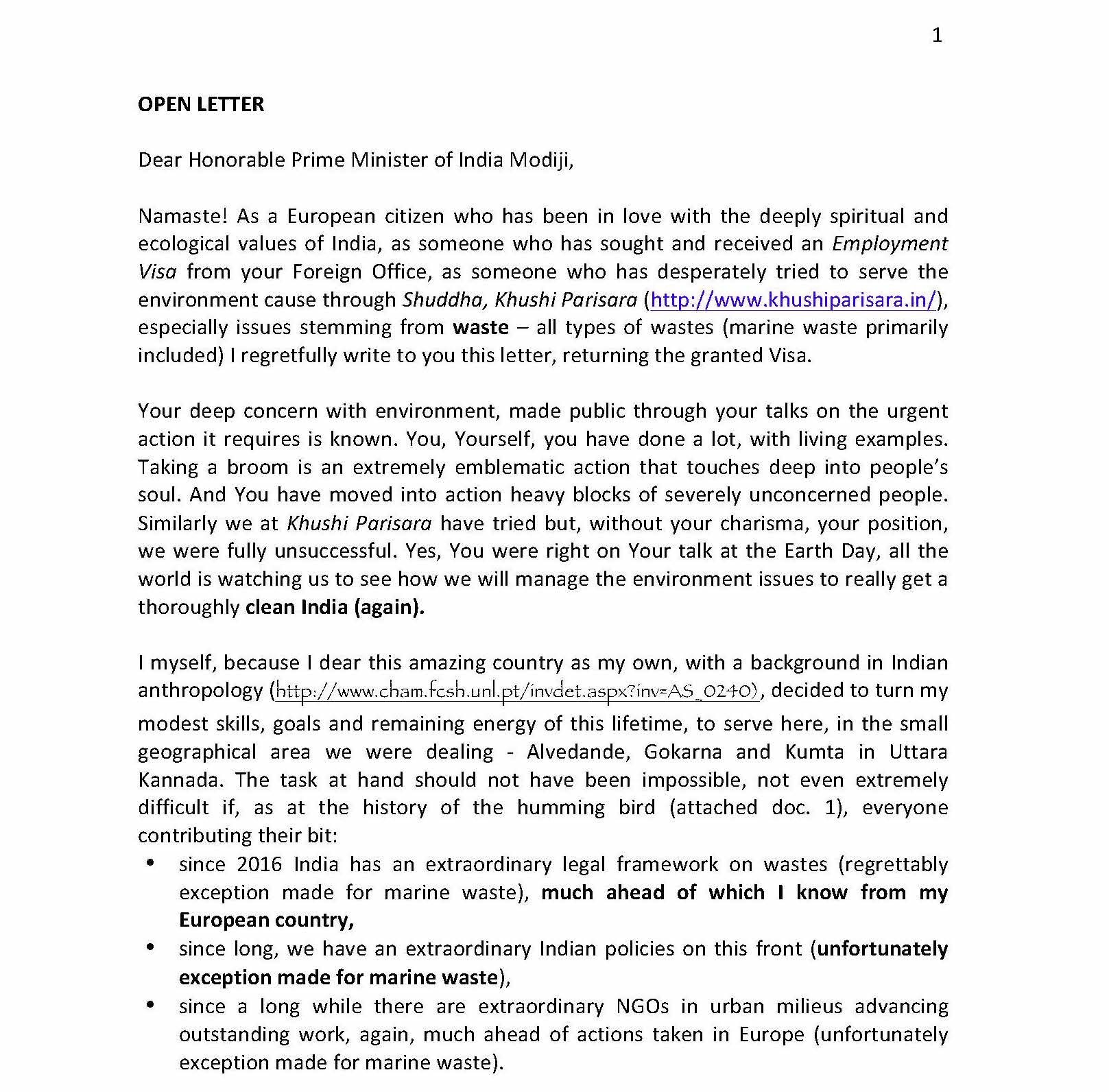 Namaste! As a European citizen who has been in love with the deeply spiritual and ecological values of India, as someone who has sought and received an Employment Visa from your Foreign Office, as someone who has desperately tried to serve the environment cause through Shuddha, Khushi Parisara (http://www.khushiparisara.in/), especially issues stemming from waste – all types of wastes (marine waste primarily included) I regretfully write to you this letter, returning the granted Visa.

Your deep concern with environment, made public through your talks on the urgent action it requires is known. You, Yourself, you have done a lot, with living examples. Taking a broom is an extremely emblematic action that touches deep into people’s soul. And You have moved into action heavy blocks of severely unconcerned people. Similarly we at Khushi Parisara have tried but, without your charisma, your position, we were fully unsuccessful. Yes, You were right on Your talk at the Earth Day, all the world is watching us to see how we will manage the environment issues to really get a thoroughly clean India (again).

I myself, because I dear this amazing country as my own, with a background in Indian anthropology (http://www.cham.fcsh.unl.pt/invdet.aspx?inv=AS_0240), decided to turn my modest skills, goals and remaining energy of this lifetime, to serve here, in the small geographical area we were dealing – Alvedande, Gokarna and Kumta in Uttara Kannada. The task at hand should not have been impossible, not even extremely difficult if, as at the history of the humming bird (attached doc. 1), everyone contributing their bit:

In our work (report attached doc. 2) at Kushi Parisara, we were aware of working in a rural area where the required behavioural change of common people has more socio-psycho-anthropological layers than in urban context. That was the part we were prepared for, but the entire work was fully blocked by administration and bad governance at every step. For the government systems, environment seems not to need any particular attention, involvement and investment.

We can do (and we did) outreach programs, we can remind local bodies of their duties – listing and calling their attention for them -, we can make clean-ups, we can make surveys, we can motivate corporations for eco-friendly behaviour, for re-sourcing resources, for prioritizing sustainability and inclusivity, we can explain, propose, remind, we can teach, we can call press meets, we can create and install eco-collecting points. BUT we cannot implement the laws, approve policies, we cannot allot funds for environment protection, for waste remediation. We CANNOT force government systems (GP, TP, MLA, and administration offices) to lead the way on complying to our great waste management rules, showing to general public the way to follow. Indeed we could not. All our actions were blocked by them. [A]

Actually we wanted to drive an intense, vast and deep collaborative endeavour with all the stakeholders involved, and not having to fight a daily fight with the ignorance, indifference, lethargy of local bodies and administration.

Concerning (waste) pollution there is no time for slow governance, for slow action. And You know it well, as the most of us. The pack of laws published last year shows it magnificently (exemption again for marine waste pollution).

Our work on plastic use, abuse and pollution, for instance, was reversed by the general sense that no model is given by High Powers on this realm. Common people say: if plastic would be so dangerous as proclaimed, some radical action as demonetization would have been taken already and we would not be seeing those believed harmful plastics, as we are not seeing 1.000 rps notes anymore.

And yes! Unfortunately it is true! We could think that Environment is not on Your Government priority. But having heard You, we really want to show that yes, we know that it is a priority thought about, and we just remind You of this priority of Yours. Please, make it actual, boost some ROOT action on the environment front: paired with outreach and penal action.

At the administration realm, there is this idea (as stated by some Officer at Your Lisbon Embassy – when Embassy and Ambassador cooperation were requested and not granted), that only NGOs have a karma to accomplish in this area (quote: “you are doing your job which is your karma”), administration and local bodies are exempted from such karma. Actually, for them is both their karma and their dharma, for which they got a post, for which we are paying. Most of them are doing neither. Please, kindly show them the way!

We don’t ask much. If EVERY single person – ALL of US – does her share the change is possible – from the PM to Assembly, from TP to GP, from to MLA, from DC to PDO, from this office to that department. They have to lead the way until reaching the common citizen or the common denizen.

Otherwise the forest is going to burn entirely if the humming bird alone is trying to put it out.

[A] Moreover, Your digital India is not working neither – your administration does not reply to emails, do not interact through internet, behaviour that blocks all interactivity. This refers to our experience at 3 levels: