ALVEDANDE, is a small village at the Kalbhag Gram Panchayat

The hamlet is predominantly composed of gabit community (fishermen), but there are also gavadi (farmers).

This village where we live was busting garbage everywhere – despite some of it being burned early morning in the choola, some of it dumped on the drain, on the river, on the seashore or on the ocean.

As everywhere else in the district, the nearby municipality is daily disposing trash burning it on the streets.

As everywhere else, the public toilets in town are collapsed unusable places.

As everywhere else, the open defecation in the village is a rule.

This is very much a common pattern shared among all of us.

But also, as some of us have done somewhere else, here we have decided to give a try to clean up around – and keep clean.

We put hands up and we created a NGO (Khushi Parisara) to tackle the so critical environmental issues at stake.

The Gram Panchayat did not answer to any of our requests.

The chosen leaders proved to be extremely efficient and diligent stirring the varied exploits, namely Dattatreya and Raghu, here in the picture painting a dustbin meant for glass items.

Dr. Subhash Candra, from the Centre for Ecological Sciences (CES), Indian Institute of Science (IISc), Kumta Field Station, has kindly come to explain to the Aryan Boys the importance of caring (and how) for their so critically threatened environment and the developmental benefits the whole community would grow from it.

Immediately after, because here women are the most exposed group to the local plaguing sanitary issues, Khushi Parisara encouraged the involvement of girls also, and the Minuguava Nakshatra group joined the endeavor.

Its leaders showed also to excel in their performance, namely Namita, Pratiksha, Chandani 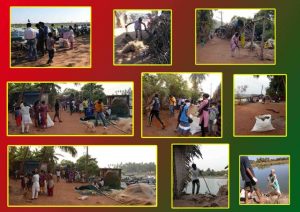 Next, in several gatherings it was explained to women the dangerous issues around the “neo-traditional” trash disposal system (burning, dumping, immersing). 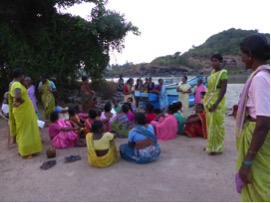 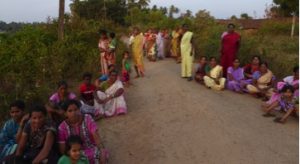 At the same time, in all the meetings held Aryans Boys, Minuguava Nakshatra and women were unanimous on their need for toilets, reporting abundant cases of reiterated dismissed requests from Gram Panchayat due to odd circumstances as land ownership, obsolescence of registers and varied administrative or cognitive misunderstandings. 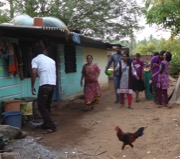 We invited specialists from the Centre for Sustainable Technologies, such as Monto Mani who kindly and uninterestedly came to help all of us in understanding the possible solutions to build toilets where allegedly there was no space to make them. He was discussing and explaining to all the varied possibilities. 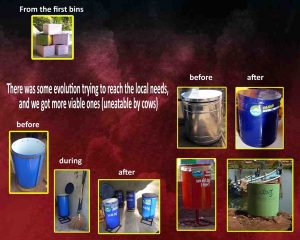 We got more viable bins (uneatable by cows) that were fixed on a clean up day drove by the Aryan Boys leaders. We have fixed also bins only for glass items. 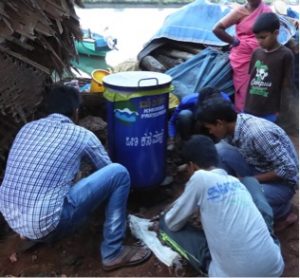 After their activities, even late, the Aryan Boys were unwearying

Here fixing the board

Invited by Khushi Parisara, the Taluka Health Officer, Dr. Ajna Naik visited Alvedande for explaining basic sanitary issues, namely how to manage the building of toilets, the disposal of waste, the problems related to its burning.

The group listened attentively and interested, asking many concerned questions to which Dr. Ajna provided length information and encouragement, easing some apparent difficulties. 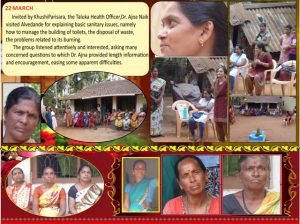