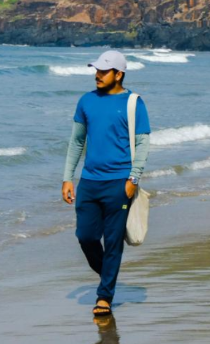 Born at Sagar, Karnataka, by mid 90’s Prashanth completed his academic education by 2019 with a Master of Fisheries, at Mangaluru College of Fisheries [Thesis: Assessment of ichthyofaunal diversity in estuarine system of Kundapura region].

Along with it, and after, he participated in Seminars, Conferences, Internship programs [Next Generation Aquaculture, Research Methodology and Data Analysis, Aqua Clinics and Aquapreneurship Development, Aqua Aquaria India, among others]

But his own portrayal better shows his early motivation for environment…

“I was born and raised in Sagara, a Malnad town rich in forests, lakes, rivers, and other natural resources. My first elementary school was in a little village called Kolale in the Balehonnuru town of Chickmangaluru, which is well known for its dense forest and numerous coffee estates. My Aunty’s house was a mile away from the school. I used to walk alone because no one from my side was going to school. The colorful birds, insects, and creatures that were coming down the walkway grabbed my attention. I used to walk into the forest as a naughty kid to harvest some wild fruits that were delicious. In the evenings, I’m responsible for returning the little calf to the livestock shed. For me, that was a fascinating pastime because I was able to reach my calf in the herd by listening to the bamboo bell strapped to its neck. I was enjoying the sound of the bug Geerunde during the monsoon. And I used to capture them and keep them in a matchbox to use as a morning alarm. Catching the fish in the stream and keeping them in a glass jar was one of the most exciting tasks. Agricultural activities were something I used to enjoy. It was like a festival during harvest. When I returned to Sagara after a year, I was looking for the creatures I had seen in Kolale. This piqued my interest in some creatures such as leaches and birds that I hadn’t seen in Sagara. During school vacations, I used to go for a nature walk. I used to collect various colors of water lilies and attempt to grow them in an aquatic setting in my home. After reading about Ayurveda in a little public library named Kalikakendra, I began to think a lot about it. I used to experiment with herbs and plants by extracting their juice and mixing it with others to see how their color changed and coagulated. I also utilized them in my paintings. My grandfather was a well-known Ayurvedic Pandit at the time, but due to his early death, his expertise was not passed down to his sons. Now, wherever I travel, I’m attempting to get traditional wisdom from the locals. Following my PU education at Sagara’s Government Junior College. By choice, I enrolled in a bachelor’s degree program in fisheries science. That provided me with a great deal of hands-on self-learning experience. I was an average academic student who never missed an opportunity to learn about the aquatic environment. After my master’s degree in Fisheries Resources Management in 2019, I worked as a research consultant at ATREE (Ashoka Trust For Research in Ecology and Environment). My task was to explore the Sharavati and Aghanashini river fish richness. That was a fantastic opportunity. After that, I worked as a fisheries consultant for NABARD bank for a while. Then, in 2021, I began working as a research assistant for the Azim Premji Foundation. My task there was to communicate with the dried fish processors in the coastal area and learn about their challenges. That was a fantastic opportunity for me to have a deeper understanding of the stakeholders, as well as economics, social structure, politics, and so on. As a research consultant for Snehakunja Trust, I am now working on an SSRC (Social Science Research Council) project. This is an opportunity for me to gain a deeper understanding of the fishing community.”